A Look Back At Apple Products Of Old 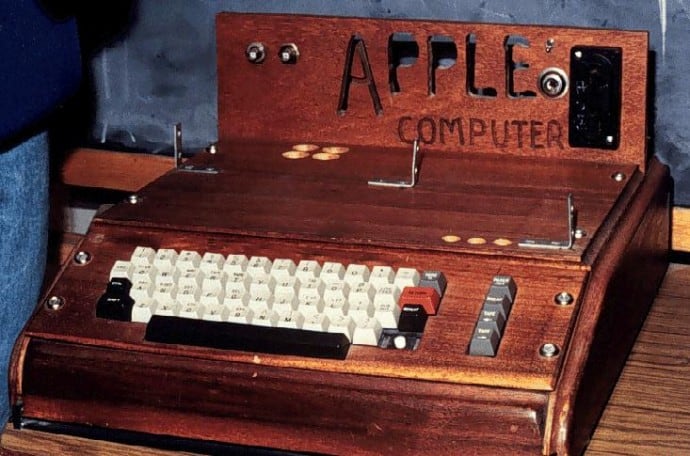 There’s a lot of buzz about the new “Jobs” biopic starring Ashton Kutcher as late Apple CEO Steve Jobs. The movie takes a look at the company’s inception and early years. Let’s take a look at especially noteworthy Apple products of yesteryear.

Steve Wozniak was a computer enthusiast who worked for Hewlett-Packard. He worked with Steve Jobs to create the first Apple computer. The fruity name was influenced by Job’s time spent on an apple orchard. They liked that it wasn’t intimidating or high-tech sounding like other companies in the market; it fit with the company’s belief that simplicity was the ultimate sophistication. Jobs and Woz debuted their circuit board computer in April of 1976 at the Palo Alto Computer club. They figured they could make a little bit of money selling their creation. They took it to their local computer store, The Byte Shop, to see if they would sell it. The store bought 50 fully assembled units from the duo, and all 50 sold. The initial cost was $666.66. Only 200 were made total, making them super rare for collectors. Just this month, one was sold for $387,750 in auction, well over 500 times its original price point.

The next Apple computer had the same processor and was the same speed as it’s predecessor, but it had some major improvements. It had the basic programming language built-in, so it was ready to use right out of the box. It’s considered the first user-friendly computer system. A huge feature was called VisiCalc: a spreadsheet application that made the lives of accountants everywhere a whole lot easier. Many bought the computer just to run this feature. The ability to display 6 different colors, the eight internal expansion slots, and a case a keyboard were other factors that differentiated this computer from the Apple I. It cost $1,298 with 4K RAM, and $2,638 for 48K RAM.

Lisa officially stood for Local Integrated System Architecture, but everyone figured it had something to do with his first daughter, also named Lisa. Jobs has since said it was clearly named for his daughter.This computer was supposed to be revolutionary. After four years and $50 million, the Lisa was released in 1983 for the ultra-steep price of $9,995. Because of the lofty price tag and few software applications available, Lisa was ultimately a failure. But it did mark an Apple Milestone; Though it was not the first computer to use a Graphic User Interface (GUI), it was the first GUI personal computer, and was the first device with a menu bar and window controls.

Although the Lisa was the first personal GUI computer, the first commercially successful one was called the Macintosh.This was the first of Apple’s line of personal computers, now more commonly referred to as “Macs”. Sold at a much cheaper price than the Lisa ($2,495 compared to $9,995), its unique GUI operating system was its saving grace; many found the 9 inch screen too small, and the inability for expansion proved frustrating.

Though other PC laptops existed at the time, none could match the speed and power of the Macintosh Portable. It cost $6,500 for the base and $7,300 with the hard drive. Portable is a relative term; the laptop weighed in at a whopping 16 pounds. Today the heaviest Apple laptop, the Macbook Pro, is less than six pounds. But it did have a pretty impressive battery life of 6-12 hours, depending on whether or not it was the backlit version. The Portable also boasted a then high-tech Active Matrix screen, meaning it updated faster and was less blurry than competitors.

The Newton was one of the first Personal Digital Assistants (PDA)— a term coined by Apple CEO John Sculley. This handheld computing device sold for $699.99. It could convert handwriting into computer text. This was a unique ability, albeit inaccurate at times. It also had the ability to connect to other computers. The Newton was too bulky to be considered pocket sized, unfortunately.

Designed with the internet in mind, the iMac hoped to bring the world of computers into the new millenium with style. This colorful computer cost $1,299 and featured a newly designed USB keyboard and mouse. This computer was the first device featuring the now signature “i” prefix. Ken Segall, an advertising agent, was responsible for the name. He says that the “i” stands for “internet”, but can also mean “individuality” and “innovation” since the the product was personal and different.

This was Apple’s first attempt at entering the world of personal audio, and they certainly did make a splash. Their secret formula for success was the perfect combination of size and storage capacity. It was a lot smaller than most hard disk mp3 players, but could hold just as much. It held more than a flash-based music player, but was small enough to compete with them. The cool industrial design was a huge draw in a market of visually bland options. The iPod sold for $399 and had an original storage capacity of 5GB.

It’s hard to imagine a time before iPhones ruled the cell-phone world, but this revolutionary smartphone wasn’t released until 2007, just over 6 years ago. You could buy the 4GB version for $499, and the 8GB for $599. The iPhone was the first advanced touchscreen smartphone. The iPhone was a definitely trendsetter, making large screen and finger-touch capabilities the norm. Now iPhones could be used for any purpose of humanity, like accessing favorite Netflix channel, watching streams, playing games and much more other.

There had been rumors of a tablet swirling around for over a decade. Anticipation was heightened with the launch of the iPhone since it was touch only. Finally, on January 27th 2010, the iPad was announced. You could pick up the 15GB, 32GB or 64GB version for $499, $599, or $699, respectively.
These are just a small fraction of Apple’s bounty of products; who knows what innovative devices will be numbered among these influential gadgets in the future? Though tomorrow’s unknown, one thing is certain: ZAGG invisibleSHIELD will keep all your Apple products safe and protected.